Previously when I first saw the Grass Skipper, I thought this was a "one of a kind" Skipper, perhaps with such deformity to its wings, causing it to have a pair to be perpendicular to the other pair when at rest.
http://mountain-n-sea.blogspot.sg/2013/09/grass-skipper-looking-like-f15-with.html

Today, I chance upon another similar specimen, again ID unknown, having the same type of marking as well as hooked antennae!
Therefore the placement of the wings at rest is thus not due to deformity, but is the attribute of such Skipper!


From the pictures, apparently, the upper pair of wings are resting on the lower pair of wings, somehow the wings are not able to close completely!  However, this was not seen in the other specimen in the earlier blog!
This is indeed very interesting. 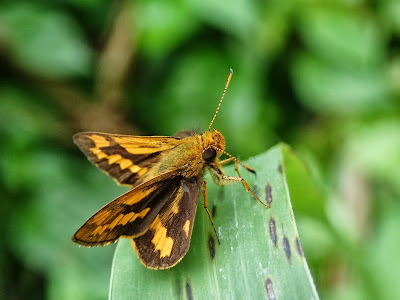 In an earlier posting, I have captured the various fungi, and beside those fungi, I have come across Chestnut (Castanopsis sp) and Ginger Flowers (Hornstedtia sp).
I have seen them either in the Malaysian Forests tracking or in some garden, but not in our Bukit Timah, and this will be my first time.

The Chestnut belongs to the Fagaceae family, of which the acorn belongs too..
Interestingly, in Singapore, I have come upon these acorns. 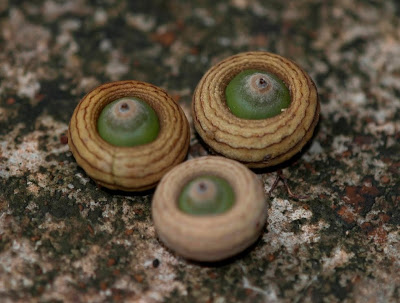 But for the Chestnut, it will be my first time.

Chestnut (Castanopsis sp)
Unable to identify the trees that have bore these fruits, thus I have no pictures.
Would watch out for the tree(s) as this species is listed as Vulnerable in the Red List.
Not too sure whether this is the C hystrix.


Ginger - Zingiber officinale
From the sanskrit "Singivera" meaning "horn body", probably referring to the roots.
Used in many countries and for variety of purposes, ginger and its close associates (like banana) are herbaceous plants (that is without woody trunk).

To those of us who eat Rojak, occasionally the dish will be spiced up with cuttings of the Ginger flowers.  And this flower will be on a long stalk.  However for some Ginger species, the flowers bud from the roots, and occasionally get cover by leaves litterl.


Today, it was special, noticed two different batches growing separately with flowers at the roots.


From the flowers, the ID for this Ginger will be Hornstedtia conica 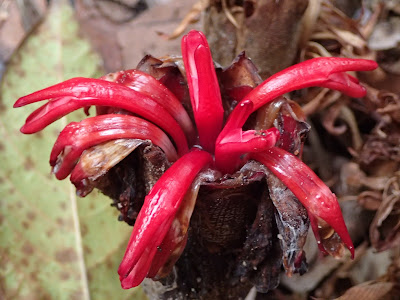 And in another place, Probably a Etlingera sp. 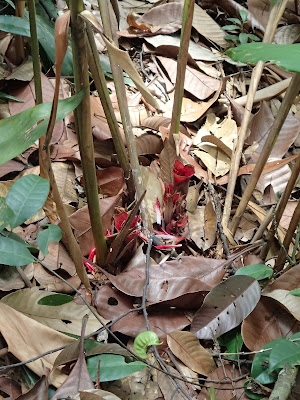 For Reference, I have also taken pictures of these two ginger flowers from Malaysia (Cameron Highland), to demonstrate the myriads of patterns and colours of the Ginger Flowers. 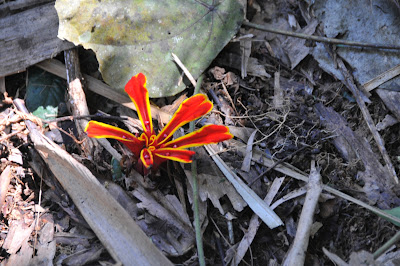 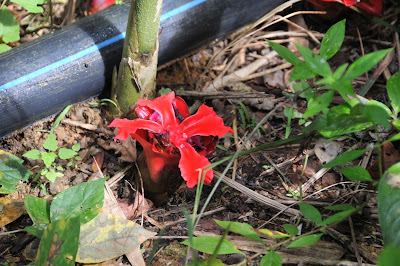 And these pictures (below) were taken from the Botanic Garden

Unusual for September, we are seeing more than the usual rainfall.

And with couple of days of rain, it will be soggy ground and damp rotten wood. Ideal for fungi to sprout!
Manage to capture a number of the fungi, and most of them I have no clue to their IDs, except for very generic Order or Family names.

Coral Fungi (Family Clavariaceae)
Such fungi was thus name, as it looks like the "marine corals", and it even have different colour for its tips.
But from these pictures, it looks more like marine sponge than coral
These "dancing pair" was found in a common path, and not too sure how long it will last. 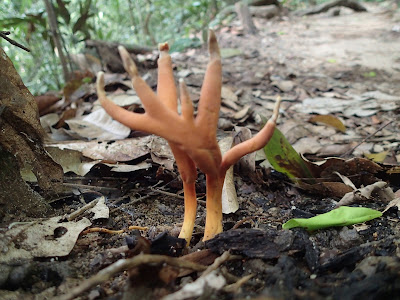 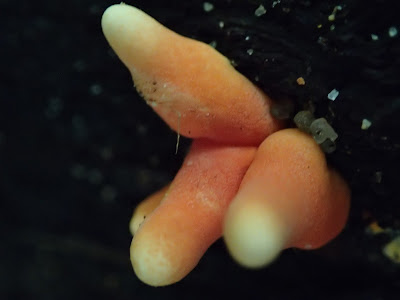 Tooth Fungi (Family Hydnaceae)
From the top or even from the side, it looks like a typical mushroom with a flat top and stalk, but look closely at the underside, and you will notice spines instead of the common gills like shape found in most of our edible mushrooms.

This is supposed to be pretty common on the forest floor, but one seldom peek below the basidiocarp (the cap) to have better appreciation of this species.

Some species of the tooth fungi grows in reverse, that is the spine is pointing upward, and not on the underside.  Yet to see such a species.

Suspect that this is Hydnum rapandum.

Bracket and Split Gill (Schizophyllaceae) and Polyporaceae
And then there are the unique underside of the Split Gill and the Polyporaceae which looks also like the bracket mushroom.

Afternote - A week later, I was at the same spot, and one of this specimen has toppled over.
Providing me an opportunity to take a closed-up of its gills.

Not too sure what is this type of mushroom, the gills structure is pitted, and looks like the same family as the above mushroom! 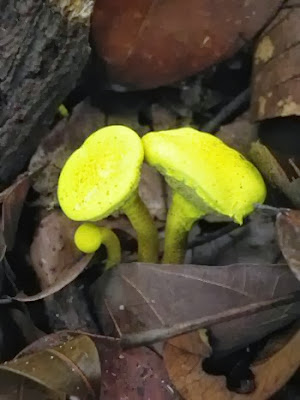 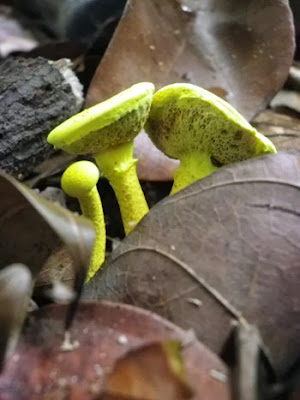 Assortment of Agaricales
Why is it called Agaricales?  Because of the gills under the cap.
And the gills can come in many patterns as seen in the pictures below, however the typical Agarcales gills radiate from the centre of the stalk (this can be observed when you are eating your mushrooms) 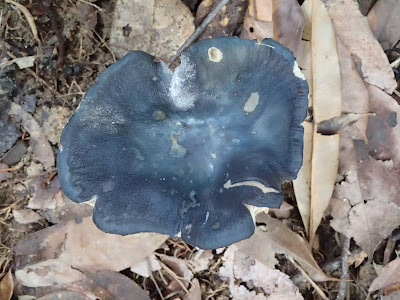 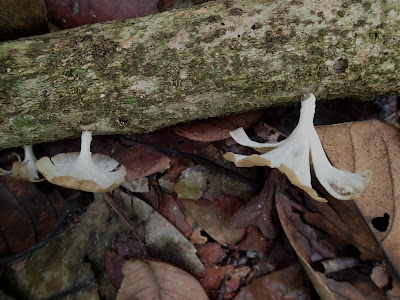 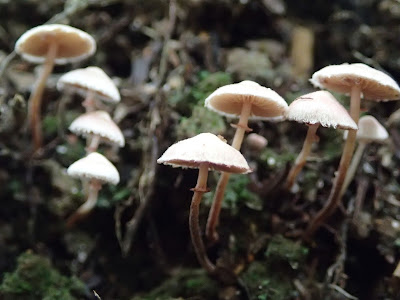 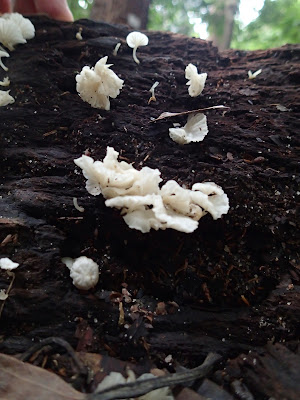 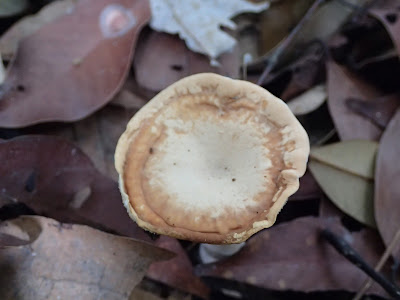 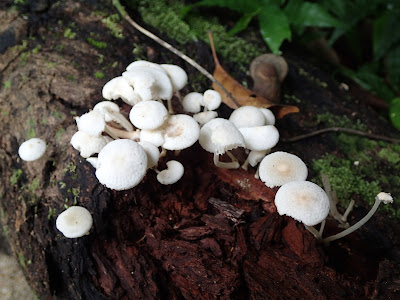 Was trekking in the Pipeline Reserve, and on the way back to Bukit Panjang, when I noticed this butterfly.
The first thought that came to my mind when I saw this Grass Skipper was that it looks like an F35 Fighterplane! With double tails and short wings!
Did a search, and believe that this butterfly belongs to the Hesperiinae family.
Short wing, this butterfly darts among the grass, however for today, when I saw this specimen, it was very quiet and allowed me to use my P&S camera to really go up close and shoot. 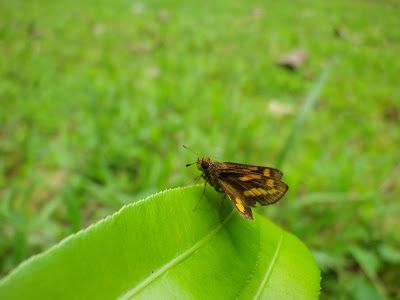 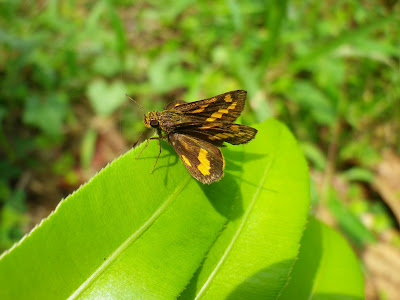 However, I still have no clue as to the exact ID of this specimen, despite checking in
http://www.butterflycircle.com/checklist%20V2/CI/index.php/start-page/startpage/showsubfamily/23
Somehow, there is no Hesperiinae that looks like this one!

Any clue, any one?
Thanks
Posted by Mountain & Sea at 6:05 PM No comments: