Rubber Tree (Hevea brasiliensis)
We know a lot about rubber tree, and I have seen many rubber seeds and pods strewn along the trails in Bukit Timah.  Not only are the evidence everywhere, but occasionally, one can hear the noise of "explosion" of the seed pods, before you hear the soft thud on the ground as the seeds and pods land!


Then I have never give it much thought about rubber seed, and fondly remember
a.   you can tease your friend by rubbing the rubber seed very hard on hard ground, and then applying it to your friend'ss bare skin.
b.   in our primary school, we were introduced to seed dispersion, and one of the method utilises by plants is the "explosive action".  Examples typically given by our teachers were Balsam Plant and Rubber Tree!


After the closure of the Railway Line, I decided to take a walk just like many folks here, and started my journey at Clementi Road.  Walking parallel to a big canal, I came across this fallen tree, with the rubber fruits (that has turned to rubber seed pods) still hanging onto the dead branches.


Then a thought occurred to me, why don't I write about the mechanics of the "explosive action".

First and foremost, like all fruiting trees, the fruit does have some fleshy inedible flesh covers by green skin. And as it matured, the outer skin started to dry up, and split at certain point, till it turns brownish, and eventually strip away from the Seed Pods. This can be seen from the picture 2 and 3 below.


From picture 2, as the fruit dries, the gap between the lobe increase, until the lobes are being held at two points (at the top and bottom)


One interesting fact of the Rubber Tree, is that it comes in THREE.  If you observe the leaves, it comes in THREE. Likewise for the fruits, it is Tri-Lobe.
Imagine the fruit hanging on the branch, and the purpose of fruits and seeds are to propagate the species. Therefore, the design of the fruits is to ensure that the seeds that leave the pod, should be away from the parent tree!
With Tri-Lobe, at least 1 lobe will be facing away from the parent tree, and if not 2 lobes.  Thus the probability of propagation is increased.


Therefore, for the explosive action to happen, and to ensure that the seed is flung outward, the design of the Tri-Lobe and the individual seedpod are rather interesting.Now the mechanics of the explosive action, as the fruit and eventually the pod starts to dry, the weakest part of the fruit is actually the seam of a single lobe. However, the 3 lobes are connected, and will stress each other, and the explosion is usually a occurrence of all the 3 lobes, rather than individual lobe from the same pod.
This drying process (dehydration) will cause the shrinkage of the lobe and is likened to the process of opening a cockle.  However, as each lobe is connected to two other lobes, and in that sense will be held in its place.
Once the stress level across the seam reaches the critical point, the shear stress or splitting pressure moves from the seams of the lobes to the TWO connecting points between lobes.

At the critical moment, and very fast, the final split occurred almost simultaneously in all the six connecting joints, and at the same time the seam of the lobe split open, and by virtue of the seed being connected to the inner wall, the seed is flung outward, awayfrom the centre of the tri-lobe.

﻿
To summarise the explosive action,
Another observation, immediately after the lobe has opened and dropped to the ground, both halves can be easily put back (just like cockle shell), but through time, it will continue to deform due to dehydration.


Finally, this is my observation from my collections of fruits, pods, seeds, and experimenting with them, as it is very difficult to catch the explosive actions on film.  And if there is any mistake or correction, kindly feedback to me.

Update 22nd July 2014
Today I chance upon a "freak" rubber fruit.  One that has 4 pods instead of normal 3s.
I would assume the explosive action will not be as effective as 3, for the angle of throw is now greatly reduced! 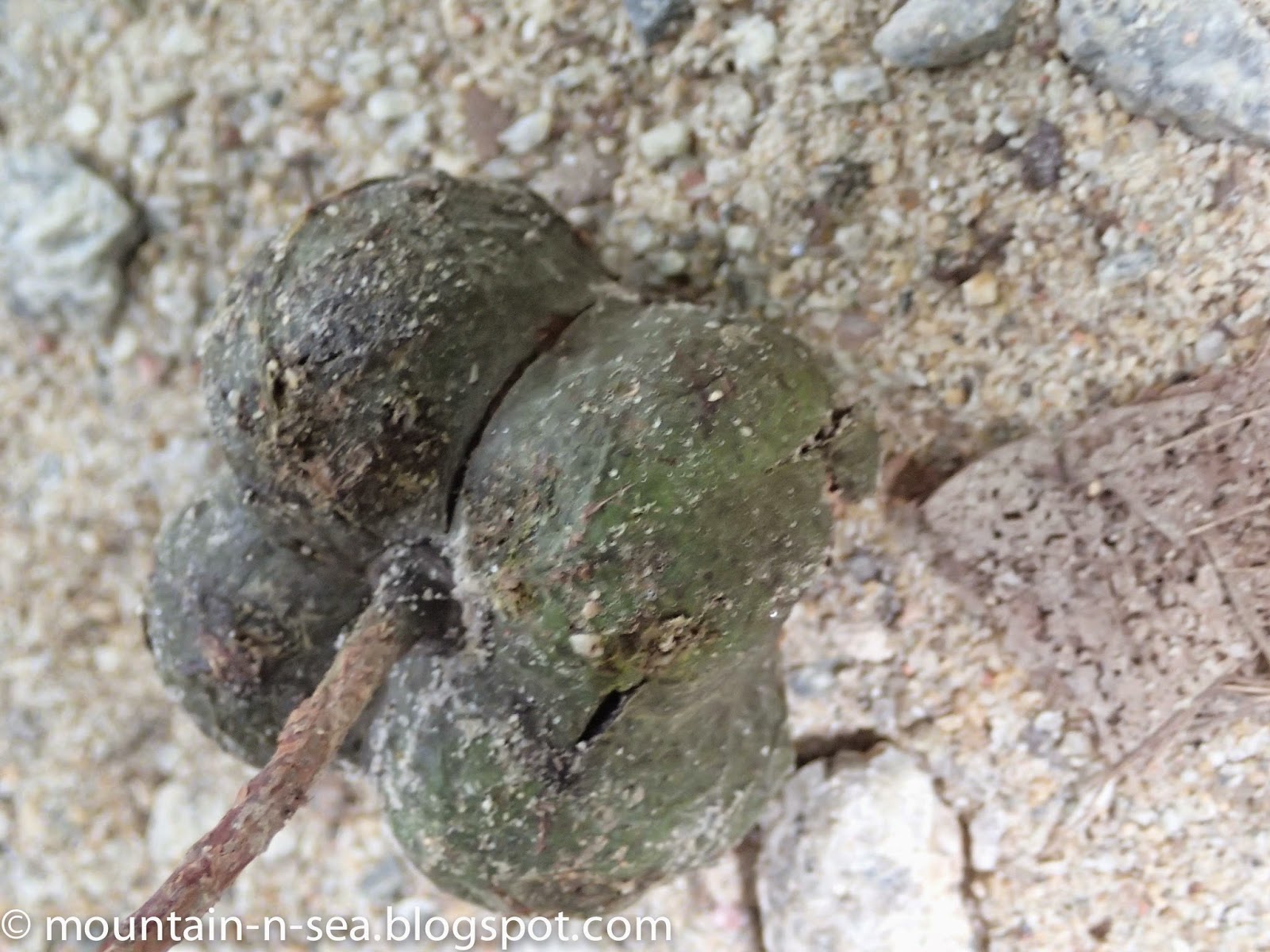 We managed to return to our campsite, and had our brunch before making another arduous descent to the crater (Senaru Lake). Today, the journey will be longer than the previous day, as we had to combine both the summit ascent as well as this descent.
Arriving at a good time, we enjoyed ourselves by the lake.  In as much as the water was warm and inviting, we were hesitant to go into the water for it was polluted with rubbish that has been carelessly discarded.  The pollutants came in many forms, and the description is best left to the imagination of the readers.  However, along the shoreline, there were many avid fishermen, hoping to land themselves a carp or two! 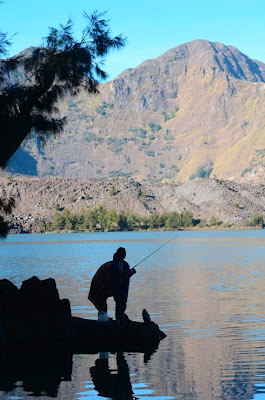 Day 3 (Lake Segara to Pos 2)
Waking up at the normal hour unlike the last 2 days, we had to ascend from the lake and up to the rim to our next campsite. Once again, it was an incessant climb up, but definitely not as bad as the journey to the summit, or the journey down.
The beginning of this journey was most challenging, as we had to negotiate narrow walkway around the lake, holding onto roots and branches for support. As we struggled to maneuver these obstacles, the porters with their heavy load were making us looked bad as they skillfully and agilely negotiated every turns without even using their hands.  Must be the poles they used for balancing!
Having given the choice of camping at Plawangan 1 or Pos 2, we decided to choose a longer journey to Pos 2 (1,500 m) for today, as it is located at a lower altitude which provides a more hospitable environment of milder climate.  Plawangan 1 (at 2,641 m) is still at the rim, and we realised that it will be cold and may be plagued with water problem.
The ultimate reason for us, is that the following day, we would have a shorter walk to Senaru village, which would be the end of this trek.

Day 4 (Pos 2 to Senaru Village)
Final day of trekking, we walked from Pos 2 to our lodge in Senaru Village.
But before the start of our trek, we thanked our porters, guides, and cooks for making this trip possible.  After all, we were carrying our daypacks which only weighed between 5 to 12 kg, but the porters were easily handling loads of between 25 to 40 kg easily, and they still managed to walk faster than us.
Summary
As we reflected on this climb, most of us who had climbed various mountains, mountains that are higher than Rinjani have to admit that this is one tough mountain. On the other hand, we felt a certain triumph of being able to reach the summit.  Many had harboured thoughts of giving up as the ways were tough, but for those who made it to the summit, there were much psyching of our mind over body, and possessing the ever pressing on attitude to reach the goal.
Such is our determination, and on further thoughts, we will be using this same determination with God's grace to overcome whatever challenges in any of our endeavours.
Acknowledgement
A special thanks to Lois for proof reading my draft.
And a big thank you to Loh CH, my colleague and fellow climber for sharing the pictues.
Posted by Mountain & Sea at 10:14 PM No comments:

Why oh why are mushrooms so hard to ID!
Coming down from my trekking, near to the beginning of the Summit Trial, one can find 2 logs, and on a good damp day, it will be covered with mushrooms.

Today is no exception, I find it intriguing that one log was covered with these white fungus, and somehow the other log was pretty much spared. 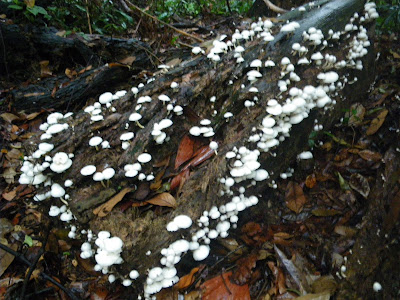 Taking some close up, I believe these are the Lepiota (sp), or commonly called the Parasol Mushroom.
(somehow I can hear some giggling over this name, isn't it obvious that mushrooms usually look like parasol. Good Question which I have no answer)

So these are some of the close-ups of this species.
From the pictures, one can see the various stages of development.
With the young mushrooms with undeveloped caps just emerging from the log, to the fully bloom mature adults. 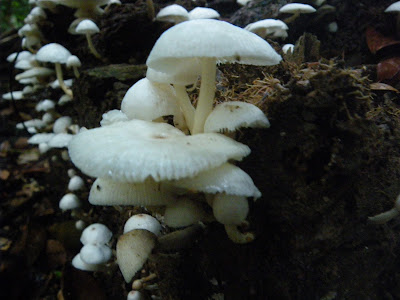 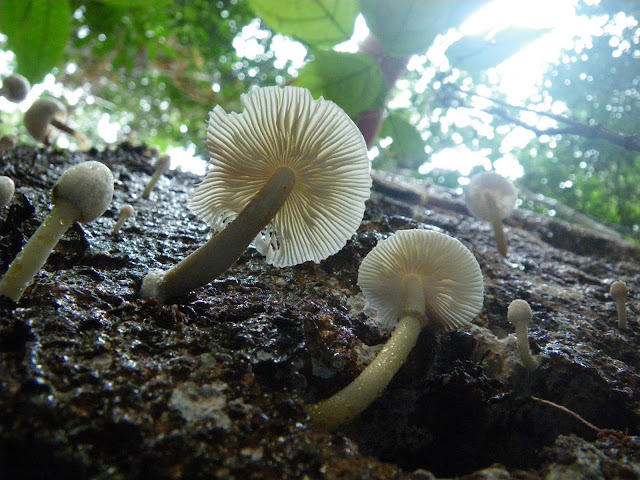 Taken from underneath, the annulus on the right specimen is pretty obvious, and the evidence of the thin cap to produce this highlighted shot. 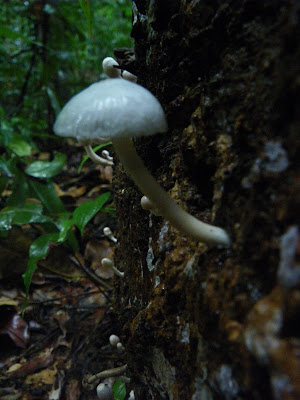 A side view of this same specimen.

Alas, from experience, these mushrooms will disappear in about a week time, leaving behind brownish patches, and nutrients for the next generation to sprout!
Posted by Mountain & Sea at 10:32 PM No comments:

Another Giant Agaricus in Bukit Timah

Where there is dead log and plenty of moisture, one is guaranteed to see fungi.
Today, having finished my climb in Bt Timah, and returning to the Dairy Farm Car Park, I chanced upon this Giant Agaricus in the male toilet.


Again, I tried to ID this specimen, and the only conclusion I have is that it is a gilled mushroom of the Agaricales Order.
Initial ID seems to place this in the family of the Brittle Cap, but those have long stipes, whereas this does not! 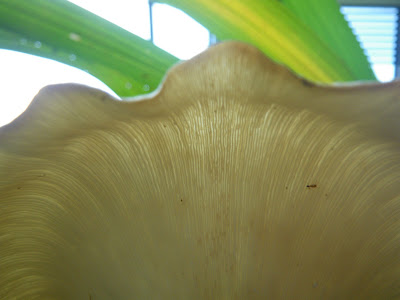 Naturally, how does one justify a 13 cm size specimen to be a giant, well I looked around and saw couple of the same species growing around, and the spread of the cap was about 5 cam.

Once again, if anybody can ID this species, please do let me know.