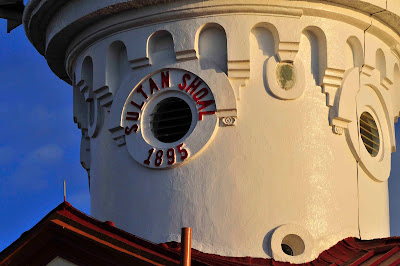 Sultan Shoal Lighthouse used to occupy a strategic location guiding ships from/to the Straits of Malacca into the . 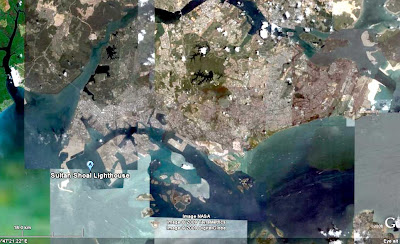 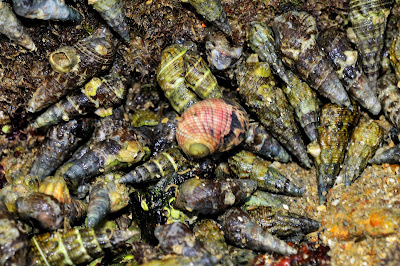 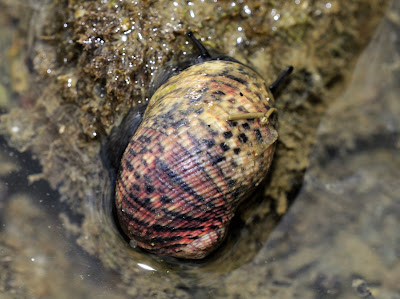 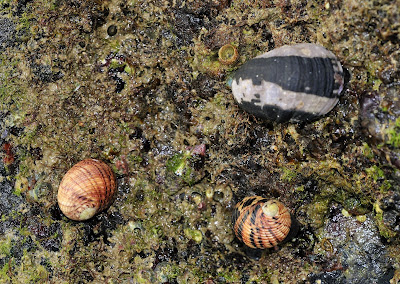 On one spot, I foound these 3 Nerites but of different species 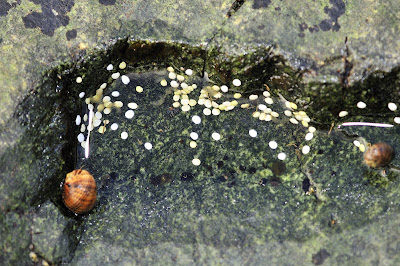 The whitish spot is actually Nerite's egg capsule. Each of these contains about 30 eggs. Now we know why the whole island is carpeted with Nerites. 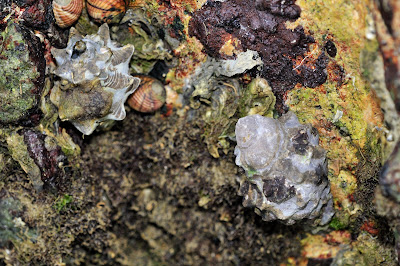 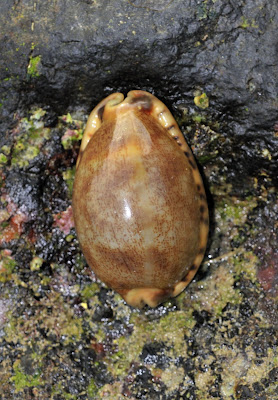 Cowrie (Cypraea arabica). The pattern on the shell looks like Arabic writing, and thus this cowrie is called as such. 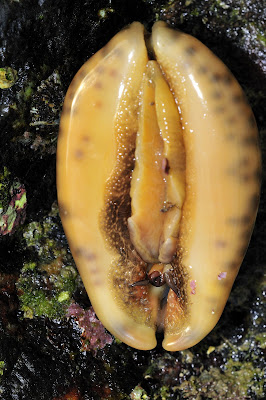 Bottom view of the Cowrie

Found in abundance is the Turban Snail, the Turban Snail (Turbo sp) is also a grazer of algae, and its notable characteristics is the “trapdoor”, in some country the operculum is collected and make into buttons. One do not have to wonder why, just look at the beautiful pattern and colour. 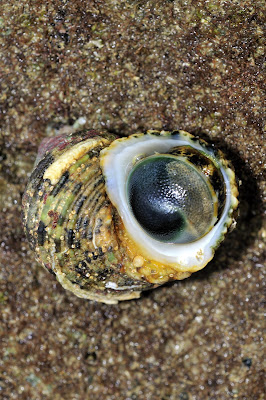 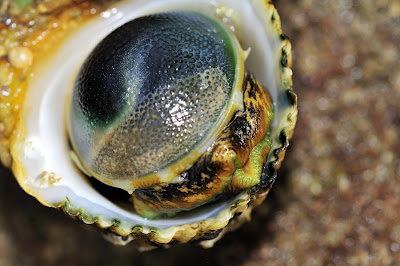 Close-up of the shell opening and operculum

The other interesting feature of Sultan Shoal Lighthouse, is a man-made sea water pool, that provides the artificial inter-tidal area that was lacking on this island. In this pool, most of the animals were trapped as the tide receded. Those not considered traps, find this a good refuge, with soft sandy mud, and detritus left by the tide. On this field trip, we have Prof Ng to guide us on crabs. 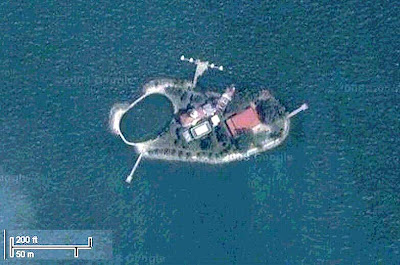 (Previously Prof Ng guided us in Raffles Lighthouse, where we found the Jaded Pearl Crab)http://mountain-n-sea.blogspot.com/2008/08/pulau-satumu.html

In this pool, we were able to see many Fiddler Crabs, and Prof Ng pointed out the endangered and beautiful Fiddler Crab (Uca tetragonon). 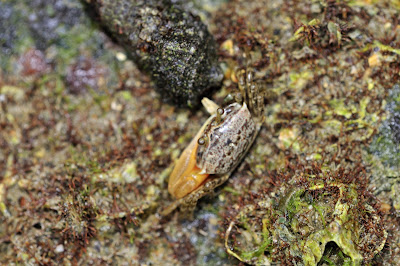 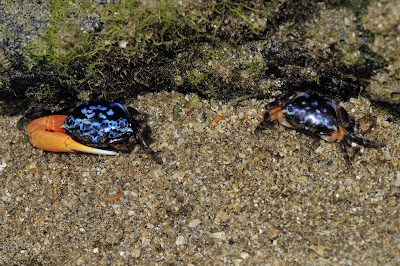 A pair of Uca tetragonon, male on the left and the female on the right

Usually in the Fiddler (Family Uca), the male is the one that is brightly colour, and the female adorns a duller shade. But not for this species, both the male and female were equally colourful, except that the male has a longer reddish pincer to attract the female as well as to ward off potential male. Uca tetragonon is extremely shy creature, and is very skittish, it will escape to its hole with the slightest disturbance in the form of light, vibration. 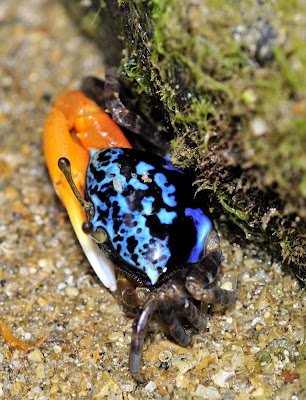 Close up of Uca tetragonon (Male) 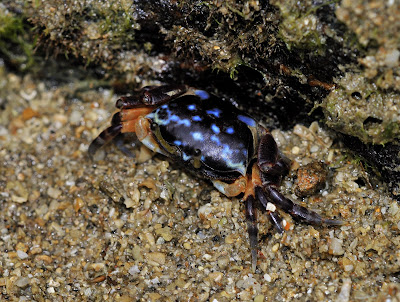 Close up of Uca tetragonon (Female)

Thus this fiddler seldom strays very far from its nesting holes. Due to its skittishness, Uca tetragonon tends to build their nesting holes near to a wall or rocky outcrop. This also work to our advantage, as to take records of this crab in their undisturbed condition, means one can observe them from above. It is extremely difficult to photo them at ground level, so I climbed onto the pool walls and adopt a prone position from the top (about 4 m up). Fortunately I was using my longer macro lens (Tamron 180 mm – equivalent to 270 mm on the 35 mm scale), even with this focal length, it was not possible to fill the frame with the crabs. A lot of post cropping need to be done, for the images to be blogged! 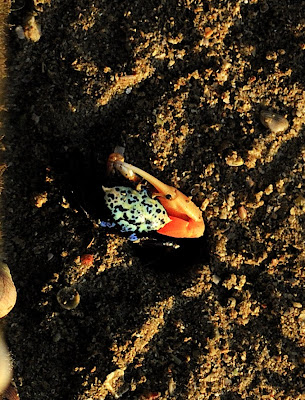 Overhead shot of Uca tetragonon (Male) near to its nesting hole 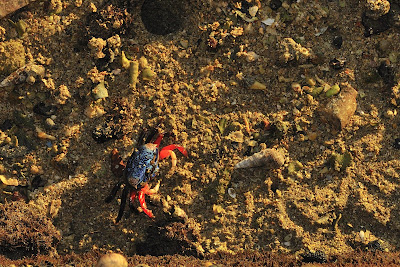 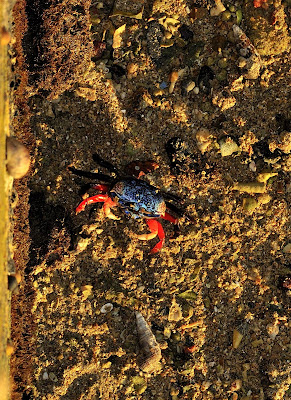 For survival, these two crabs below have found a novel way of hiding from predators. One has decided to cut a piece of sponge and wrapped around its carapace, and the other has chosen to use a dead leaf as a cover. 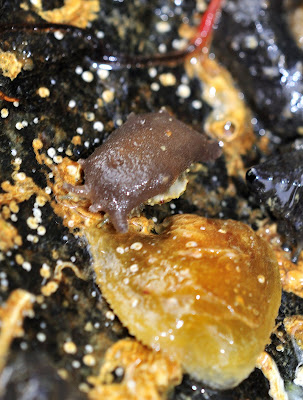 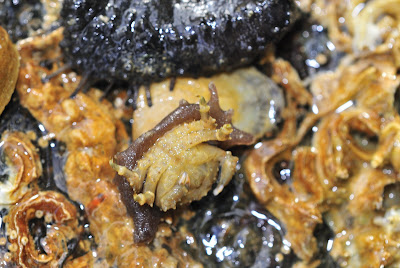 The other master of camouflage, looks for suitable leaf, and with its modified claws (especially the last pair), it will hold onto suitable size leaf. Once again, until it started to move, especially against the flow of water that it will give itself away. 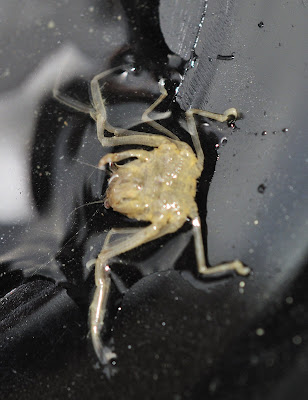 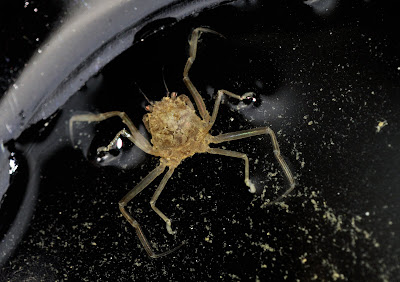 To better understand the Leaf Porter Crab, we decided to give it a different size leaf, and somehow it find our leaf was less than ideal, and will always stick to its own! My conclusion is that the size and span of its claws must match the holding areas of the leaf, otherwise it will not be able to use the leaf effectively! 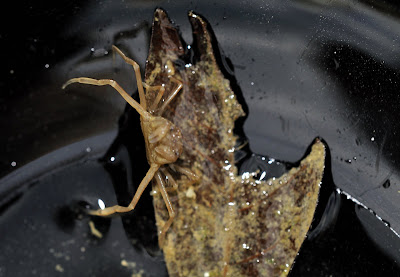 Leaf must fit to the size of its holding claws 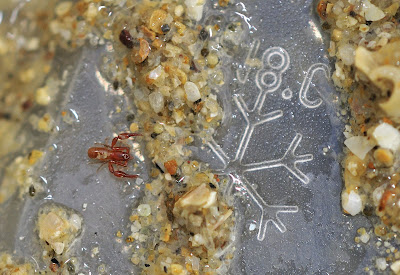 Compare the grain of sands to the Pseudoscorpion 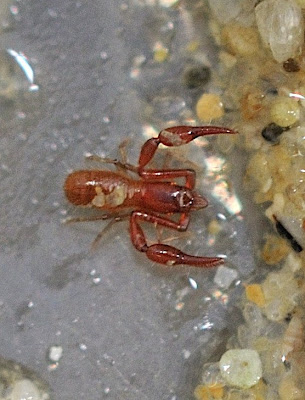 Blow-up image of the Pseudoscorpion

(In macro photography and depending on the lens, the distance between the lens and the object is 12 to 15 cm. Handholding and expecting to get sharp details requires very good hand holdin and breathing skill. But one technique that I find useful, is to fire rapid shot by setting the camera to continuous shooting mode, and having pre-focused (auto focus for macro is not going to work), take a number of shots. Manage to get one decent shot from about 25 shots. If you happen to be involved in excessive menial tasks before the picture taking, you will find that most of your shots will be ruined by your shaking hands!)

For other findings on this field trip, please check out